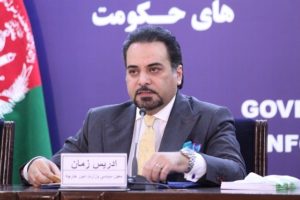 Ariana:  Afghanistan’s Acting Minister of Foreign Affairs Idrees Zaman [is] accused of ethnic cleansing in the Ministry of Foreign Affairs after he dismissed several directors from their positions in a short period of time. A number of lawmakers on Monday called on the Afghan parliament to prevent “such illegal dismissals”. Click here to read more (external link).