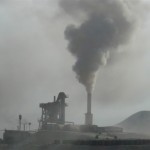 Tolo News:  There are no official statistics on how many Afghans die of pollution-related illnesses, but the research group State of Global Air said more than 26,000 deaths could be attributed to it in 2017. In contrast, 3,483 civilians were killed that year in the Afghan war, according to the United Nations. Kabul, a city of some 6 million, has become one of the most polluted cities in the world — ranking in the top of the list among other polluted capitals such as India’s New Delhi or China’s Beijing. Decades of war have wrecked the city’s infrastructure and caused waves of displaced people. Click here to read more (external link).