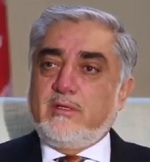 Tolo News: The Stability and Convergence election campaign, led by Presidential candidate Abdullah Abdullah, has announced a protest in Kabul city on Friday to demand “transparency” in the election process. “The protest is aimed to defend the valid votes of the people, and the people will not allow fraud to once again dominate the country,” said Abdullah’s team. Click here to read more (external link).

One thought on “Abdullah’s Team Calls for Kabul Protest”