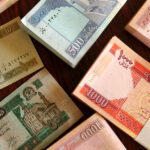 Afghanistan’s central bank on December 14 took steps to stop a steep drop in the country’s currency after it lost almost 12 percent of its value against the dollar in a matter of hours the day before.

The central bank said it had held a number of meetings with foreign exchange dealers, representatives of commercial banks, and the business sector to halt the fall in the afghani.

“Based on its strategic planning policies, Da Afghanistan Bank has always tried to avoid volatility that could be harmful to the purchasing power of the people,” the central bank said in a statement.

Zabihullah Mujahid, a spokesman for the Taliban-led government, said a meeting of the council of ministers also instructed the government’s economic commission to “take urgent steps to ensure the stability of the afghani.”

The afghani on December 13 dropped from 112 to the dollar in the morning at Kabul’s Sarai Shazada money market to 125 by the afternoon. It recovered slightly on December 14 and was quoted at about 114.

The afghani traded at around 77 to the dollar before the fall of Kabul and at 97 a week ago.

The withdrawal of foreign aid after the Taliban seized power in August has left Afghanistan’s economy on the brink of collapse.

The United Nations has warned that nearly 23 million people — about 55 percent of the population — are facing extreme levels of hunger.

A spokesman for the World Food Program (WFP) said in Geneva on December 14 that the economic crisis combined with a drought and ongoing conflict have meant the average family can barely cope.

A WFP surveys showed an estimated 98 percent of Afghans are not eating enough, with seven in 10 families resorting to borrowing food, which pushes them deeper into poverty, the spokesman, Tomson Phiri, told a briefing.

Prices for food, fuel, and other basics have been rising, putting them out of reach for many people, and pressure on the afghani has made the impact worse.

Last week the World Bank said donors had approved the transfer of $280 million from a frozen trust fund to two aid agencies to help Afghanistan respond to its humanitarian crisis.