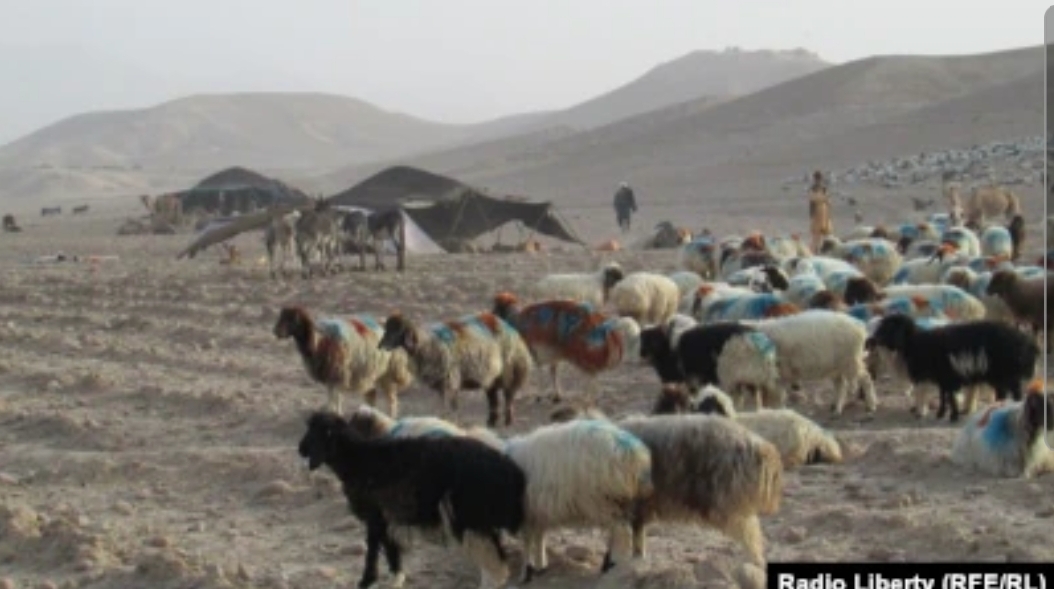 Haji Abdul Manan, a tribal leader of the Afghan nomads, grows wistful recalling the wandering lifestyle his extended family gave up for a sedentary life a decade ago.

The 70-year-old patriarch, who spent his childhood and much of his adult life on the move, says he can still hear the bells around the necks of camels and goats in their caravan as it migrated between the warmer plains of southern Afghanistan in winter to the cooler green pastures of the central highlands during summer.

“I long for the freedom that defined our lives,” Manan told Radio Free Afghanistan of the difficult decision his family had to make in settling in the southeastern province of Ghazni. “Nothing could beat the sense of freedom where we could just stay anywhere that we liked and leave without worrying.”

“We are called Kuchis in Afghanistan because we were constantly on the move,” he said, referring to his community’s name by the Dari word that denotes their status as nomads. “The Kuchis were not restrained by borders, and our lives were truly free.”

Kuchis or Pawindas, terms used for Pashtun nomads hailing from more than a dozen tribes of the larger Ghilzai group, were once one of the largest nomadic communities in the world. But decades of war, forced displacement, droughts, socioeconomic and technological changes, and a push toward settlement have rendered them one of the most marginalized communities in Afghanistan.

After attempting to adapt to a sedentary life, Manan says he preferred his family’s constant travels, which saw them traverse several hundred kilometers each year between Kandahar and Helmand provinces in the south to Ghazni’s mountain meadows.

“Our lives were not defined by rivalries and feuds,” he noted, referring to the land disputes that are common in Afghan villages. “We had few possessions, but we were healthy and happy. I had never even heard of all these diseases that are so prevalent now.”

While the Afghan government has attempted to integrate the estimated 1.5 million Kuchis by granting them representation and access to government assistance programs, the group still lacks key services such as health care and education and has received little of the international aid that has helped lift other Afghan communities out of poverty.

“The previous century was one of tragedy for the Kuchis,” Manan noted. In the Afghan calendar, the 15th century began last month. “The Kuchis endured hunger and destruction, and yet no one took pity on us.”

Mohammad Siddiq, another Kuchi, agrees. He says natural disasters like droughts and manmade problems such as hard borders and insecurity have destroyed the Kuchi lifestyle.

“Wandering around the country, you will often feel that each village is ruled by its own government,” he told Radio Free Afghanistan of the widespread harassment of nomads whose cattle he says is frequently claimed by the Afghan security forces. “Nomadism was appealing because of the freedom it entailed, but that’s gone now.”

He says a typical Kuchi herd consisted of 50 camels and some 400 goats and sheep. In good years, these animals delivered enough offspring to bring their owners a sizable profit while ensuring abundant supplies of milk, cheese, meat, and wool.

Siddiq says Kuchi life was the portrait of a hardworking community that cherished its freedom and where men and women shared the burden of work. The close-knit groups loved to celebrate festivities with horseback riding, shooting competitions, music, and dancing. “Our hearts are in mourning because this has all been taken away,” he noted. “How can we now celebrate anything ever again?”

Repeated droughts, he explained, have forced Kuchis to give up their camels to buy tractors, which limits their movement to roads.

During the past two decades, occasional clashes between Kuchis and settled Hazara farmers have erupted with each side blaming the other for the violence. Such tensions have come to a head in other parts of Afghanistan, where rapidly increasing settled populations, some of whom were formerly nomads, see the nomads as intruders who threaten their land and resources.

Previously, Afghan nomads paid little attention to international borders, and many groups often traveled into Pakistan. But Islamabad’s efforts to regulate movement between the two countries with the construction of a fence along more than 2,500 kilometers of its border with Afghanistan have impacted major nomadic migration chains that moved to the plains around the Indus River in Pakistan in winter from their summer destination of Afghanistan’s Hindu Kush Mountains.

Haji Gulmiran, a Kuchi community leader in the eastern Afghan province of Nangarhar, which borders Pakistan, says the fencing has devastated their community as being cut off from their usual grazing lands has caused a food shortage.

“We lost access to pastures on the other side of the fence [in Pakistan] while here we have lost meadows and grasslands to housing and farming,” he told Radio Free Afghanistan.

Bor Jan, another member of the community, says the Kuchis have received little assistance from the Afghan authorities, whose actions have only served to compound their suffering.

“The government has either usurped our pastures or is keeping us from our traditional pastures,” he told Radio Free Afghanistan. “We have always lacked access to education and health care, but now we find it difficult to get our national ID cards,” he added. Afghanistan is currently issuing electronic ID cards to its estimated 35 million citizens. In addition to serving as an identity document and proof of citizenship, the cards enable holders to access government services.

Noor Jamal Kuchi, a government worker in Ghazni, says he has pleaded with Afghan officials to address his community’s problems. He says he has asked for government help with improving their livestock, employment, and access to land to little avail.

“The last century [in the Afghan calendar] saw the Kuchis lose whatever they had gained during the past 1,000 years,” he said. The last century in Afghanistan began in 1920. Since then the country has seen violent uprisings, palace and military coups, civil wars, Soviet occupation, and the ongoing war that began with a U.S.-led military attack on the Taliban regime after September 11 attacks two decades ago.

But the government in Kabul is adamant it is committed to supporting the Kuchis. The Afghan Rural Rehabilitation and Development Ministry says that under its Kuchi Development Strategy, a plan it adopted in 2019 after extensive consultations with the community, it is committed to spending $30 million on helping nomadic and seminomadic communities.

The strategy will purportedly set up 902 community development councils, who will help identify and implement water supply and renewable energy schemes.

Lawmaker Nangyalai Lawang, a representative of the Kuchis in Wolesi Jirga, says initiatives to help Afghan nomads have been slow to implement. He cited a presidential order from six months ago requiring the government to purchase meat from nomads for the Afghan security forces.

“We have held meeting after meeting on how to put this into action, and yet there’s no progress,” he told Radio Free Afghanistan.

For some Kuchi leaders, Kabul needs to take urgent practical steps to preserve their way of life.

“For Kuchis, our pastures are as vital as water is for the fish,” Gulmiran said. “Without them, our flocks and tents are unlikely to survive.”