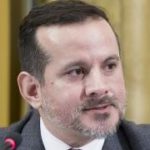 8am: According to a source, the TAPI project was not implemented in Afghanistan due to Ajmal Ahmadi’s intervention. “Ajmal Ahmadi was the son-in-law of Mohammad Ashraf Ghani, and Ghani believed that Ahmadi was an economic genius,” said the former official at the Afghan embassy in Ashgabat. “He had monopolized the entire executive authority of the TAPI project, which he did not work on to advance the project himself, nor did he allow anyone else to work on the project.”  Click here to read more (external link).