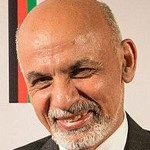 Tolo News: President Ashraf Ghani’s rival candidates on Thursday accused him of misusing his authority and manipulating national assets for campaign purposes hours after the inauguration of Darulaman Palace, an imperial monument in the western part of Kabul that was heavily damaged the civil war in the country.  Mr. Ghani at a ceremony inaugurated Darulaman Palace after its renovation on Wednesday evening. The renovation of the palace took almost four years. But there was no presence of prominent Afghan politicians even the Chief Executive Abdullah Abdullah.  Click here to read more (external link).