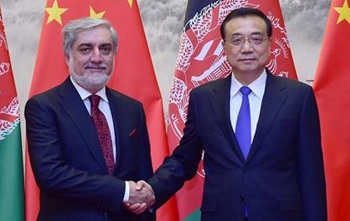 A Chinese official says neighboring Afghanistan has expressed its support for Beijing amid ongoing maritime tensions between China and regional and extra-regional countries over the South China Sea.

Hou further said the Afghan officials also supported China’s efforts to resolve the South China Sea issue through bilateral channels and through peaceful means such as negotiation and consultation.

He made the remarks following a meeting between Afghanistan’s Chief Executive Abdullah Abdullah and Chinese Premier Li Keqiang in Beijing.

The South China Sea has become a source of tension between China, the United States, and some other countries, which are seeking control of trade routes and mineral deposits there.

China has on different occasions asserted its sovereignty over the sea, parts of which are also claimed by Brunei, Malaysia, Taiwan, Vietnam and the Philippines.

Washington has accused Beijing of attempting to take advantage of the situation and gradually asserting control over the region.

China rejects the allegations and says the US is interfering in regional affairs, deliberately stirring tensions in the South China Sea.

Hou further said that Li voiced Beijing’s willingness to assist peace talks between the Afghan government and Taliban and to propel development projects.

Hou said Abdullah pledged Afghanistan’s support for China in its fight against extremist and terrorist groups.

Beijing has long provided Kabul with financial support, and Chinese companies have invested in various projects across Afghanistan, particularly in the mining sector.

Last month, China said it wanted to forge strong military ties with Afghanistan which is under a US-led occupation.

Beijing is worried about the prospect of militants from its restive far western region of Xinjiang getting support from the Taliban and other groups in Afghanistan, Pakistan and central Asia.

China is equally nervous about the US establishing a foothold on its borders which has found traction as part of President Barack Obama’s “strategic pivot.”

Under the plan, the US is reorienting significant elements of its foreign policy towards the Asia Pacific region and encouraging many of its partners outside the region to do the same.

US policymakers believe the lion’s share of the political and economic history of the 21st century will be written in the Asia-Pacific region.