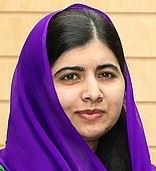 WASHINGTON — Malala Yousafzai says that the world should come together to support the fundamental rights of Afghan women.

The Nobel Peace Prize Laureate said in an interview with VOA that the people of Afghanistan, Muslim countries and the international community should stand with Afghan women in their fight for their rights to education and work.

After seizing power in Afghanistan in August 2021, the Taliban have steadily imposed repressive restrictions on women in the country, including banning them from secondary education, from working in the government, from traveling long-distance without a close male relative and from going to parks and gyms.

Last month, the group banned women from universities and working with non-government organizations.

On the eve of International Education Day, Yousafzai told Nazrana Ghaffar Yousufzai of VOA’s Afghan Service that the Taliban’s measures are “against Islam” and she called on Muslim countries to raise their voices against it.

This interview has been translated from Pashto and edited for length and clarity.

VOA: What do you expect the international community to do on this International Education Day to guarantee Afghan women’s fundamental right to education?

The fathers and brothers of Afghan girls should also come out to support their rights. We all know that barring women from education is against our culture and religion. In addition, at the international level, leaders need to play their role and stand with Afghan women. Muslim nations should get together for Afghan women and raise their voices for the protection of women [in Afghanistan]. It is because we all know that in Islam, education is an obligation for all human beings. It is an obligation for women. Our religion has taught us to seek education and knowledge, and for that, Muslim countries must raise their voices that this ban is against Islam. International organizations and leaders should come together and stand with the Afghan people.

VOA: How do you see the future of a nation where women are barred from education and their access to almost everything is limited?

Yousafzai: Afghanistan is the only country in the world where girls are deprived of the right to education. Women are not allowed to work. Women are deprived of their fundamental human and Islamic rights. I stand with my Afghan sisters. On this day when we celebrate International Day of Education, when we talk about education, we must think about Afghan girls’ education right. If Afghan women are deprived of education, it doesn’t only harm them but also the economy, peace, and prosperity of Afghanistan. The U.N. studies show that the ban on education is causing $5.4 billion to Afghanistan’s economy. So, this harms peace and the people of Afghanistan. We must not forget Afghan women on this day.

VOA: What is your message to Afghan women during these challenging times?

Yousafzai: I stand with my Afghan sisters. I salute their courage. They raise their voices for their rights. I hope they will get their right to education, employment, and political participation. I also hope that the international community will stand by them.

Roshan Noorzai from VOA’s Pashto Service contributed to this report.