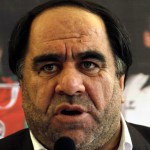 Afghanistan FA president, Keramuudin Karim, has been suspended by Fifa since December 2018.

The Guardian (UK): Fifa and Asian football’s governing body were made aware of sexual abuse allegations against senior Afghanistan football officials and a coach more than two years ago, according to emails seen by the Guardian. The Asian Football Confederation said late last year, after Afghanistan women’s national team players made detailed allegations of sexual and physical abuse, that it had received no complaints of abuse. Last November a Fifa source said that it began investigating claims of sexual abuse when it was told of the allegations in March 2018. The Guardian has been shown emails which suggest senior officials within Fifa and the AFC were informed in April 2017 of possible abuse of players within the Afghan federation. No action was apparently taken by either organisation… Click here to read more (external link).