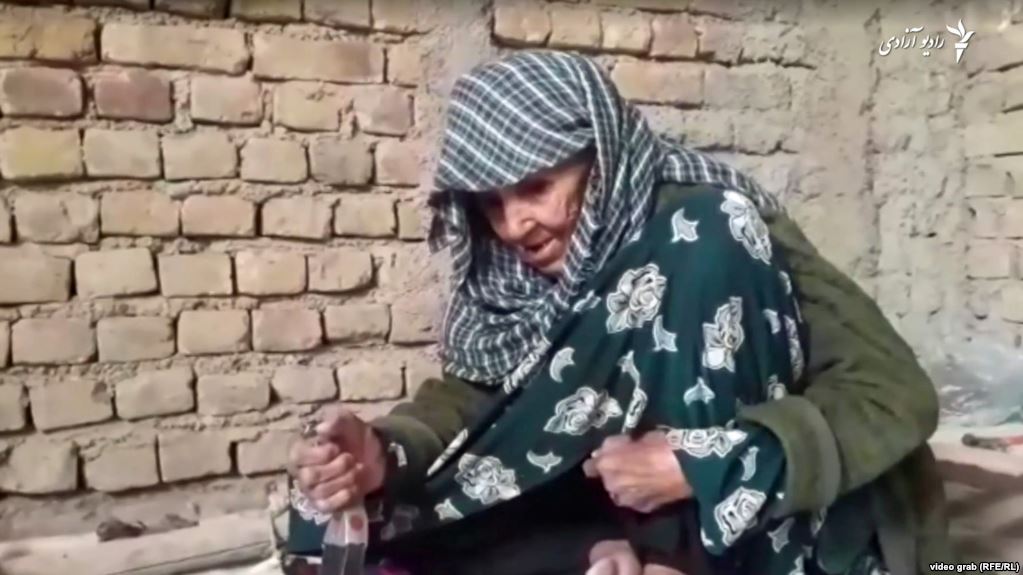 Bibi Fatemah’s family is among thousands in Afghanistan struggling to survive chronic poverty.

The 75-year-old is frail, and the work is exhausting. But the grandmother has no other option but to work after becoming the sole breadwinner in her family of 10.

“I weave a carpet every week,” Fatemah says as she combs the threads of the colorful carpet. “We sell each carpet in the market for about 500 afghanis [around $7]. That’s how we survive through each day and night.”

Fatemah’s family is among thousands in Afghanistan struggling to survive chronic poverty that has been fueled by a deadly 17-year war between the Western-backed Kabul government and the Taliban.

Several months ago, Fatemah was forced to flee her village in the Pashtun Kot district of the northern province of Faryab, one of the most violent areas in the country. The remote province on the border with Turkmenistan has long been the scene of intense fighting between the Taliban and government troops. Islamic State (IS) militants have also recently established a presence.

Fatemah moved to Faryab’s capital, Maymana, where the family rented out space in the dusty basement of an unfinished two-story building. Most of the basement, where the family lives and Fatemah works, is occupied by lumber.

“There’s no work for the men here,” says Fatemah, who supports her two daughters-in-law and seven grandchildren. Most of the men in the family paid smugglers to take them across the border to Iran to find work, she adds.

An estimated 1.5 million-2 million undocumented Afghans live in Iran, working menial jobs. But with a worsening economic crisis hitting the Islamic republic, some 800,000 Afghans returned to their homeland last year.

Fatemah, who has been weaving carpets since she was a child, has since taken on the mantle of breadwinner.

She admits it is an unusual situation. Men are usually the breadwinners in families in Afghanistan, a deeply conservative country where many women do not work outside their homes. Carpet weaving is an ancient craft and one of the biggest industries in northern Afghanistan.

Female contribution to household income is increasing in Afghanistan. The Asia Foundation, in its 2018 survey, found that 19 percent of Afghans say that female members contribute to their household income, an increase of more than 5 percent since 2009.

Afghanistan’s official national unemployment rate is 24 percent, although it is believed to be much higher. Around 55 percent of Afghans live below the poverty line. The country is also heavily dependent on dwindling foreign aid, and is in the midst of the worst drought in decades.

Despite her best efforts, Fatemah admits the family is barely making ends meet. “What can you buy with 500 afghanis?” she asks, referring to the around $7 a week she brings home. “Thread for the carpets? Food? Clothes?”

The annual per capita income in Afghanistan is around $2,000, meaning Afghans make on average around $5.50 a day, according to the CIA World Factbook.

The family has few possessions. Several mattresses, cushions, and blankets rest against the concrete wall. Pots and kitchen utensils lie on the ground.

Fatemah, surrounded by her grandchildren, says the family fled their village with little more than the clothes on their backs. She does not know when they can return to their village. “We had to get out,” she says. “I didn’t even have enough time to take my weaving equipment.”

Faryab is one of the most deadly and violent provinces in the country. Pashtun Kot, a district of more than 200,000, is contested between Afghan forces and Taliban militants. IS militants have also gained a foothold since appearing in the province in 2015. There are also numerous illegal armed gangs involved in kidnappings-for-ransom, extortion, and drug smuggling in the remote province.

On January 8, a police chief was among five officers killed in Faryab’s Garziwan district as the Taliban kept up the pressure to seize control over parts of the province.

Local officials say the Taliban is now in full control of two of 15 districts in Faryab, while they are active or contesting government control in many of the other districts.

The provincial government estimates that more than 17,000 families have been internally displaced due to the fighting in Faryab.

Over 1 million Afghans are internally displaced, driven from their homes by violence and a devastating drought. Hundreds of thousands of Afghan refugees have returned from Pakistan and Iran in recent years but many stay in makeshift refugee camps inside Afghanistan because they are unable to go back to their homes due to the war.