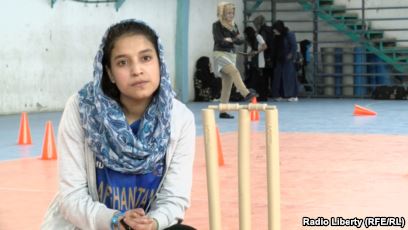 Ogai Wardak’s team is unable to play any other teams, because of the daunting logistics of travel, providing security, and simply finding a suitable venue.

KABUL — Ogai Wardak was a 12-year-old cricket fan in Kabul when she learned the Afghan Cricket Board had quietly disbanded the country’s fledgling national women’s team in 2014.

The sport’s governing body in Afghanistan said at the time that “social pressure” and “insecurity” had caused a shortage of female players. Critics, including the team’s former coach, allege that conservative men on the Cricket Board oppose the idea of women competing in sports.

Whatever the case, there has been no officially sanctioned cricket program for women or girls in Afghanistan since 2014.

But Wardak’s passion for the sport has continued to grow — inspired by the fairy-tale rise of the Afghan men’s team to full-member status in the International Cricket Council (ICC) and World Cup play.

Support and coaching from her older brother has also fueled Wardak’s desire to play.

At the age of 14, in the absence of any organized girls league, Wardak took matters into her own hands. She started her own team.

The team has never received support from the Afghan Cricket Board, and Wardak has refused financial contributions from women in Afghanistan’s parliament, saying she doesn’t want ties to any political faction.

Instead, each girl on Wardak’s team pays about $1 an hour to rent a private gymnasium in western Kabul where they can practice without provoking religious conservatives who say sportswomen are “un-Islamic.”

Now 16, Wardak has contact with seven other self-funded girls teams that also play behind walls or inside tents. The other girls teams are spread across the country in places like Kandahar, Jalalabad, and Mazar-e Sharif, and in the provinces of Logar and Khost.

The daunting logistics of travel, providing security, and simply finding a suitable venue have been a formidable barrier for Wardak — a recent high-school graduate who is now studying for law-school entrance exams.

“It’s been my dream for the past four years to play a real match in a real ground,” Wardak tells RFE/RL’s Radio Free Afghanistan.

“For Afghan women, cricket is not just a game. It is a struggle,” she says. “People should know Afghan women are not just living in darkness and illiteracy, being punished and hit. Cricket lets us show that Afghan women have the capacity to work for our dreams. We have hidden talents we want to reveal through this struggle.”

“We don’t want war anymore. We don’t want darkness. We don’t want atrocities,” she says. “From now on, the world should know Afghan brothers and sisters are working together, hand-in-hand, to build this country.”

But the difficulties faced by Wardak and other Afghan girls are immense. “We cannot play in the parks and in the streets,” she says, noting only 20 percent of her team members’ relatives support the notion of girls competing in public.

“We must play indoors unless we create special academies where we can play outdoors behind high walls,” she says. “But we do have an indoor playing ground here, and in different places, where girls can play according to the customs and culture of the people.”

Madina Zazai, a 17-year-old high-school graduate who has played on Wardak’s team for two years, says many Afghan parents don’t allow their daughters to compete in sports. “I faced a lot of difficulties before I received permission,” Zazai says. “A lot of girls face problems from their own relatives. My mother was the first supporter who allowed me to play cricket.”

“It’s difficult for girls to tell their father early in the morning they want to go out alone to train for cricket,” 17-year-old teammate Sheba Akbari explains. “Fathers often think their girls will be wearing shorts and people will watch their bodies move. This is a big issue for an Afghan father. Maybe in other countries girls have this freedom. But in Afghanistan, it’s not this way.”

Even at their private indoor practices, Wardak’s teammates wear head scarves and long trousers when they play.

What is not covered is the joy that radiates from their smiles as they bowl or bat.

Wardak proudly wears an “Afghanistan” jersey given to her by a member of the men’s national team as she passes along coaching tips from her brother.

She says her de facto mentoring is necessary because a promise by the Afghan Cricket Board to provide a coach has never materialized; neither has the board’s promise to find the girls an outdoor playing ground in Kabul.

Human Rights Watch researcher Heather Barr says such unfilled promises are part of a wider pattern in Afghanistan, where most “plans to empower women and girls” are aimed at appeasing foreign aid donors and the government’s commitment to follow through on women’s rights issues is “abysmal.”

“We want the Afghan Cricket Board to create a girls cricket academy,” Wardak says. “We want protection from the Cricket Board and we want to continue training, under their guidance, with good facilities and good coaches.”

Afghanistan’s short-lived national women’s team was co-founded in 2010 by coach Diana Barakzai, who learned the game from her brothers as an Afghan refugee growing up in Pakistan.

From the start, the team faced resistance from conservative Afghans opposed to women competing in sports.

The Afghan Cricket Board canceled several appearances at international tournaments, saying it received “Taliban threats.” But the women did play in Dushanbe in 2012, where they won a six-team regional tournament.

In late 2014, explaining why the women’s team was disbanded, then-board Chairman Nasimullah Danish described threatening telephone calls from Taliban militants who said women’s cricket was against Islam and Afghan culture.

Current board members — including Chief Executive Officer Shafiqullah Stanikzai — refused to be interviewed on the record by RFE/RL about why there is no Afghan women’s cricket team and no board-supported program for girls.

Privately, several board members have told RFE/RL that they continue to receive threats and warnings not to support women’s cricket.

Afghan Cricket Board spokesman Fareed Hotak says the board is “working on a plan for the current year” that would include “facilities” for women. But he would not provide further details about the plan.

“God willing, we will implement our plan,” Hotak says. “The Afghan Cricket Board will go forward according to Afghan culture.”

But Barakzai says the board uses the issues of “insecurity” and “Afghan culture” as an excuse to mask prejudice against women, noting that there are Afghan women’s teams in soccer, track and field, boxing, tae kwon do, and other sports.

Barakzai says she believes the board fired her and disbanded her team because she had complained that conservative board members were obstructing the development of the women’s game and misusing U.S. aid.

She also alleges the board tried to force her to field a team of Pakistani police women using falsified Afghan documents — and that she was fired after she’d refused to comply with that demand. “The fact I am still alive is a wonder considering the current situation in Afghanistan and the evidence I presented to Afghanistan’s parliament,” she says.

An internal corruption probe in 2014 by the board found no wrongdoing and key board members have since become government ministers.

Meanwhile, current board members who spoke to RFE/RL only on condition of anonymity responded to Barakzai’s corruption allegations by accusing her of running the women’s team for her personal interests — a charge Barakzai denies.

Hotak dismisses the corruption allegations, saying they came from a person seeking “personal gain” who worked in a department of the Afghan Cricket Board and “was fired for not keeping up with the rules of the organization.”

When the International Cricket Council granted Afghanistan full membership status in 2017, it accepted the board’s “insecurity” pronouncements and waived its requirement that member countries must have a national women’s team.

“Afghan women who want to become cricketers are in a hopeless predicament,” Barakzai says, noting that she was contacts for more than 4,000 girls and woman who are begging to play the game. “The board is extremely politically motivated and we have seen the involvement of neighboring [Pakistan], which has created a situation where there is no formal support for our sportswomen.”

Barakzai also cites the views of board adviser and former Afghan men’s coach Taj Malik, who publicly declared recently that women’s soccer is “un-Islamic” and that it is “un-Islamic for women to run.”

Malik also told the U.S.-based satellite TV sports channel ESPN that “Islam does not allow women and girls to participate” in cricket.

Hotak says those were Malik’s personal views and “not the Cricket Board’s stance.”

“There is not a single witness who can say the Afghan Cricket Board is supporting women,” Barakzai says. “They’re not letting women play cricket and they’re not developing women’s cricket. They are denying girls the right to play cricket.”

For now, girls who have formed their own teams independently from the board must depend on their own resources and tenacity, or support from sympathetic Afghans, foreign embassies, and donor groups.

Foreign donors have helped build more than 100 outdoor cricket pitches in 22 Afghan provinces since 2008 — but those facilities are used only by males.

Most have been boys. But several hundred Afghan girls have been coached at separate weeklong camps in Kabul, Jalalabad, and Mazar-e Sharif.

Foreign donors say they never initiate programs for girls without consent from parents and the local community.

Foreign charities and Afghan individuals who support girls cricket asked RFE/RL not to identify them, saying they fear publicity could endanger them and the girls they are trying to help.

One foreign charity administrator told RFE/RL that the situation for girls cricket in Afghanistan was getting worse, not better.