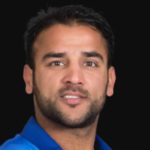 Afghan cricketer Shafiquallah Shafaq has been banned from the sport for six years after acknowledging charges of match fixing.

“This is a very serious offense where a senior national player is involved in the corruption of a high-profile domestic game,” ABC senior anti-corruption manager Sayed Anwar Shah Quraishi said.

Quraishi said Shafaq’s admission of guilt and his cooperation with the investigation helped him avoid a harsher punishment.

The ABC said that Shafaq will contribute to educational programs to help young players learn from his mistakes.